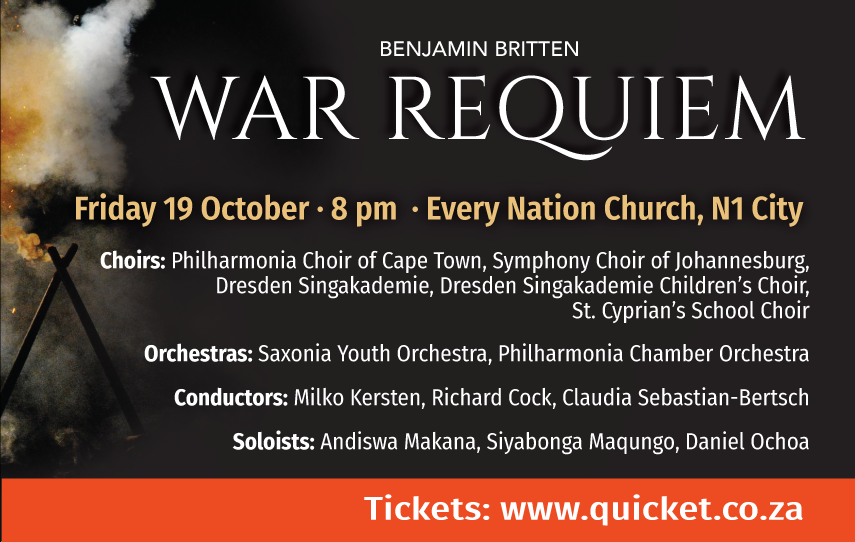 The War Requiem, Op. 66, is a large-scale, non-liturgical setting of the Requiem composed by Benjamin Britten mostly in 1961 and completed in January 1962. The War Requiem was performed for the consecration of the new Coventry Cathedral, which was built after the original fourteenth-century structure was destroyed in a World War II bombing raid. The traditional Latin texts are interspersed, in telling juxtaposition, with settings of poems by Wilfred Owen, written in World War I.

The work is scored for soprano, tenor and baritone soloists, chorus, boys’ choir, organ, and two orchestras (a full orchestra and a chamber orchestra). The chamber orchestra accompanies the intimate settings of the English poetry, while soprano, choirs and orchestra are used for the Latin sections; all forces are combined in the conclusion. The Requiem has a duration of approximately 90 minutes. (Wikipedia)

The Philharmonia Choir is joining forces with the Symphony Choir of Johannesburg, the Dresden Singakademie adult and children’s choirs, and the St. Cyprian’s School Choir (in Cape Town only). The Saxonia Youth Orchestra will be accompanying us, along with the Philharmonia Chamber Orchestra in Cape Town. This large number of performers, who will be arranged in three separate groups during the performance, will require three conductors! The concert has been two years in the planning, and promises to be a unique and profound experience for the performers and audience alike.

COMMENTS RECEIVED FROM AUDIENCE MEMBERS AFTER THE PERFORMANCE:

~ It was absolutely magnificent. Well, well done! It was an extraordinarily moving  experience of a lifetime. Personally I was close to tears given the utter madness of wars, and their corruption.  We have played our CD three times over the weekend, but it just does not compare with Friday’s performance. ~

~ An amazing and inspiring performance of an enormous work ~

~ Thank you to all who made a contribution to this amazing & unique performance. It was an extraordinary experience. ~

~ Well done on taking it on. I really appreciated hearing it in this centenary of the Great War; it honoured Wilfred Owen and the millions of war victims. It should be compulsory arts attendance for Presidents (of powerful countries, and of powerful arms producing corporations). ~

~ What a wonderful evening ~

~ What a special and moving performance it was on Friday p.m. One that will most certainly be stored in the book of memories forever! Herewith conveying a massive shoutout of appreciation to all involved! A forever fan! ~

~ That was the MOST amazing concert I’ve ever been to! Very well done to everyone involved. ~

~ Let me say what a profound experience it was to be at the War Requiem – a fantastic experience that moved me to tears. ~